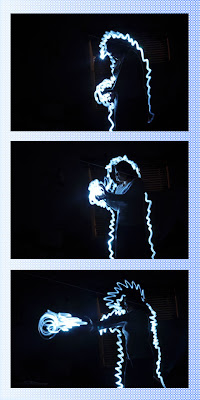 Remember way back when we had great cartoons on tv? I watched Doug, Hey Arnold, Pokemon, and Dragon Ball Z just to name a few. Well, while flipping through HBO, my brother and I found Dragon Ball Z, the movie! Memories of following Goku on his adventure to search for the seven Dragon Balls came flooding back. Yet, I hardly remembered the names and faces of the actual characters, so we were constantly googling images of the original characters. For example, Lucy Liu played Chi Chi, Goku's girlfriend, and Yun-Fat Chow played Master Roshi, but neither looked like the original cartoon characters.

After the movie, we did some light painting with a 20 second shutter speed and a flashlight. Today's photo collage is a sequence of a Kamehameha as a tribute to Dragon Ball Z.

Oh, there is also a big winter snow storm that is making its way through Georgia right now. I love how in the South, the whole city shuts down when it snows - schools are closed, companies cancel work, events end earlier, etc. Anyway, expect to see some snow photos tomorrow.
Posted by enjoyneer at 11:12 PM