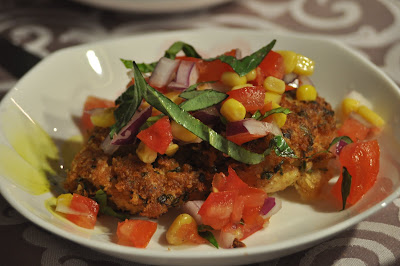 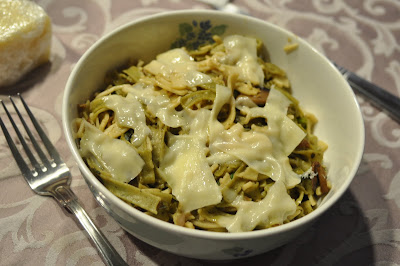 After a whole summer's worth of being an amateur food critic and posting my food blog album on facebook, I've realized that I can't properly be a food critic unless I know a little something about cooking.

Last week while buying groceries, I picked up the latest issue of EveryDay with Rachael Ray (food magazine) with lots of pretty pictures of summertime dishes and recipes.

After much deliberation, my brother and I decided to attempt the End-of-Summer Chicken Milanese and Mushroom Straw and Hay Pasta. The End-of-Summer Chicken Milanese is essentially breaded chicken breast topped with corn, tomato and onion relish. The Mushroom Straw and Hay pasta gets it name from the green spinach fettuccine and yellow egg fettuccine that look like staw and hay. However, the real flavor in this dish comes from the marsala sauce and porcini & portabella mushrooms.

Let me tell you, we were a wreck in the kitchen! We kept dropping things on the floor, spilling things on ourselves, and messing up left and right. But in the end, we had a finished product! We cooked a little too much pasta for the amount of sauce we had, so the pasta wasn't as flavorful as we would have liked. However, that chicken dish was THE BOMB. Really impressed myself with that one haha.

Lessons learned in the kitchen: