Today has been quite an emotional day.

Handfuls of strangers in Irvine were introduced to me as my family. My own flesh and blood. I don't know if you can imagine it, but I feel like a whole part of my life was missing and is now added. Granted, most of them are related to my grandma on my mom's side (she has 9 siblings), so many of them are second cousins/uncles/aunts or whatever you call them. But my idea of extended family being so distant has completely changed.

Don't get me wrong, I knew the existed and even corresponded with some of them, but today they really became real. They all knew who I was because they saw me the last time I visited when I was three years old. They were SO excited to see me. Honestly, I thought coming to Irvine for the wedding would be really awkward since I'm not close with anyone here, but my relatives really make me feel at home and treat me as one of their own.

I seriously feel like I've been missing out. But I'm glad I got to meet them.

Tonight, I also sat in on my cousin's wedding rehearsal. This is my first wedding of a peer that I've been to, and it is such a strange feeling knowing that this could happen to me soon. She was a freshman in their fellowship and he was an upperclassmen when they first met. Now they're this hilarious and super chill couple giving each other high five kisses at the alter. Also, I really admire my cousin, because she's totally the opposite of bridezilla. She's the most stress-free and easy going bride to be I've ever seen. Instead of freaking out about the logistics, she just goes with the flow and enjoys the company of her family and friends. I really hope I can do that at my wedding.

I laughed a lot today at the rehearsal. But I'll probably cry tomorrow.
Posted by enjoyneer at 2:30 AM 1 comment:

My second cousin is getting married this weekend in Irvine, so I road tripped to California with four other friends from WashU. After two days of driving around 2000 miles, we arrived at our destination.

One great thing about Oklahoma is that they have Brahms, a grocery store/ice cream shop/fast food joint. There, I had my first chicken in a while! Since I'm staying at another family's home this summer, I don't want to burden them even more with my vegetarian/pescatarian diet. Therefore, this week I've been building up my body to be able to handle eating meat again. At Brahms, I got their chicken finger salad, which was actually really good. That could just be because I haven't had meat in a while. 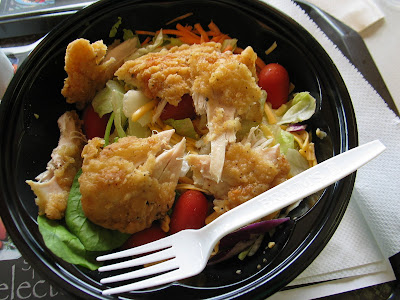 In Texas, they have this great BBQ/gas station called Rudy's. I ordered half a chicken, corn on the cob and beans. My friends ordered the brisket and ribs, which they said were the best and moist BBQ they've ever had, better than Pappy's in St. Louis. However, their sauce and beans can't even come close to Pappy's. 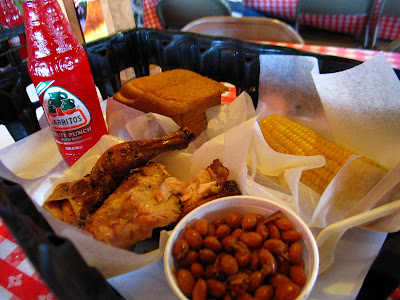 Next was New Mexico, which was pretty boring except for two things. 1) Their painted highways. 2) Their Quality Inn in complementary breakfast, which had the best two eggs and pancakes I've ever eaten. I don't understand how pancakes could be that heavenly. They actually kind of tasted like funnel cake.

The next day we set off to drive through Flagstaff in Arizona, but due to 80 mph winds and sand storms, the highway was closed and we had to take a detour further south through Pheonix. The guys were very tempted to watch the Lakers vs Suns game there, but we chugged along. 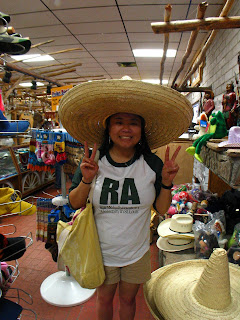 By 11am, we reached Riverside, where one of our friend's grandparents live. His grandma cooked a magnificent Taiwanese dinner for us with "three cup" chicken, minced meat rice, salmon fish cakes, and asparagus. I'm really glad I adjusted my body to eating meat before this meal. I miss Taiwanese food so much.

After a good night's rest in San Marino, I finally got to eat In-n-Out! I ordered a cheeseburger and animal style fries. Twas as good as I remembered it, but of all the meat that I ate, my body is least accustomed to beef :( From a marketing perspective, In-n-Out is one of the strangest fast food chains because 1) they hardly advertise except by word of mouth and 2) they had people from all ages and ethnicities there. Usually, businesses aim to target a specific demographic or audience, but In-n-Out managed to draw everybody! I'm impressed. 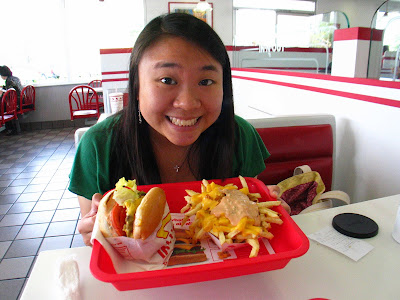 And this is just the beginning.
Posted by enjoyneer at 6:33 PM 4 comments: 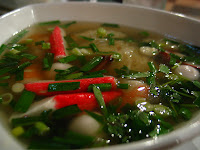 I'm done with junior year! I'm going to be a WHAT? A senior you say? WOW. That's crazy.

Strangely, I had the most fun this semester during reading week and finals. I suppose its because we don't have class and study hours are a bit more flexible.

Some highlights from the week:

While reading the news on CNN.com tonight, I found two pieces of news that caught my attention. First is the failed car bomb attempt in Times Square in New York. To be honest, my first thought was, "I'm going to be working a block from Times Square this summer. I don't want to die." Yes, New York is such an exciting and lively place to be, but it is also one of the most targeted cities for terrorists. I was already a bit scared of going to New York, and this sure isn't helping.

The second piece of news is the Gulf oil spill that is getting closer to shore. While digging deeper into this story, I found a very interesting video of how human hair is one of the best ways of soaking up spilled oil. Salons from all over the nation send their hair cuttings to Matter of Trust in San Francisco where they turn the hair into mats and booms.

Junior year of high school was the first year that I went on a mission trip. Our church went to Nashville, TN for an alternative Spring Break and it turned out to be one of the most fulfilling weeks in my life. I saw a video of this year's Nashville trip on my Facebook newsfeed. Man oh man, how I desired to be there again. Eating lunch and talking with the homeless, hanging out with old people, sorting food bank boxes, chilling at Centennial Park, and living in community with fellow brothers and sisters in Christ... those were good times.

But I keep thinking about my last post, that where I am now is my mission field. Here, I have the ability to keep long-term relationships rather than brief one-time interactions with people that I'll never see again. Sadly, I'm definitely not using those relationships to the fullest. However, by the grace of God, he still works in people's lives despite how much I've done. And today, I got to witness God do that. Without my prompting, a spiritual conversation arose among the group I was with. It was beautiful. These are the moments that mean so much more with people that you have relationships with than strangers. As I've said again and again, be in the here and now.
Posted by enjoyneer at 2:04 AM No comments: