After seriously considering joining Victory World Church in Atlanta, I'm now checking out their small groups to really get plugged into community. Tonight, I checked out one of their co-ed small groups called The Movement. When I got there, the leaders surprised us telling us that we were going to go do Gas Groupon.

For those who missed my earlier post about God rocking my world, Gas Groupon is where a group of us pools our money together to buy a gas gift card for someone. My group had many disappointing rejections, but that's okay, it is part of a butterfly effect. However, at the end, God told us to look out for someone who has a handicap and will really stand out. There was the adult black woman who got out of her car and was limping.

"MA'AM! MA'AM!" We called out. No response. We run up to her and talk to her, and realize that she's reading our lips because she's deaf. Talk about a handicap!!

We asked her if we could pray for her, and she said that she wanted to be healed. So in Jesus' name, we prayed that her hearing would be restored and that the healing could either be instant or a process.

To be honest, I was questioning in my heart, "Can she really be healed? Will this really work?" Oh me of little faith!! God give me more faith! I want to believe. I want to look Impossible in the eye, and say, "You are no match for my God." Grant me more faith, please.
Posted by enjoyneer at 10:46 PM No comments: 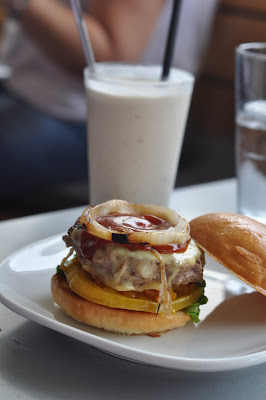 Caught up with a fellow WashU Deltasig at Flip Burger in Buckhead tonight! Flip Burger is a gourmet burger joint known for its creativity and innovation. I got "The Local" which is grass-fed beef, farm lettuce, heirloom tomato, grilled vidalia onion, and local cheese. In addition, I got the Krispy Kreme milkshake, which is essentially liquid donut :)

If you are ever in Atlanta, you MUST MUST MUST come here! The prices are reasonable too.
Posted by enjoyneer at 8:50 PM 1 comment: 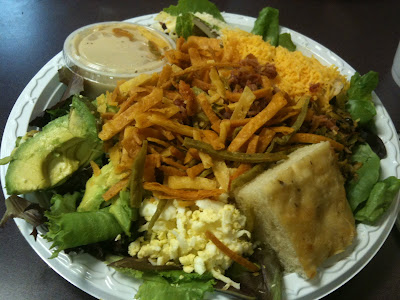 Discovered my soul mate at work today. She works in the cubicle next to me, and she is a woman after my own heart - she's a major foodie! And she loves lists! Oh man, oh man. You know me and my bucket lists. Well, she sent me her list for favorite casual and fancy restaurants in Atlanta, and for Alpharetta!

For lunch today, we went to Fancy Pantry, a small deli with an amazing selection of salads, sandwiches, wraps, and desserts. I was an okay fan of salad/sandwich places until I saw their menu. Now I'm probably their #1 fan. Today, I ordered the thai chicken salad, which had avacados, tomatoes, egg, bacon, tortilla chips, and cheese over a bed of mixed greens with some peanut dressing. WIN.
Posted by enjoyneer at 11:01 PM No comments:

Teaching Brother How to Drive 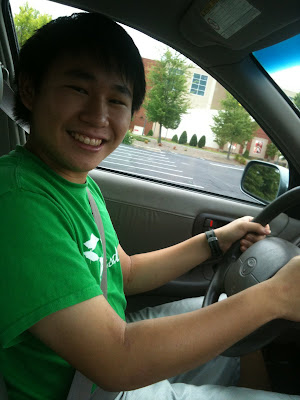 I kissed my mom goodbye and told her I loved her as I left the house to teach my 15 year old brother how to drive. He got his learner's permit recently, so I've been given the responsibility to teach him how to drive. We found a huge empty parking lot in front of The Dump, a furniture store only open on the weekends. It was funny because there was a Nathan's Driving School car practicing there too.

My brother did surprisingly well. It was a much smoother drive than when I first learned how to drive.

I knew this day was coming,and now that it is here, it is exactly what I expected. Looking at my baby brother behind a driving wheel is too surreal. Soon he will be free to roam when he gets a car, and he won't need me anymore. Sigh.

On a completely different note, my second day of work was really fun! I met another DeltaSig in the elevator who graduated from UGA. And for lunch, I went to SAGE with my buddy, the mentor I was paired up with at Nielsen. He's in the same position that I'm in, but he's been here for a year, so he would be able to answer a lot of my questions. Turns out, we have a lot in common, and he's a Christian! I'm super excited to get to know him better and feel really blessed to have him as my mentor.
Posted by enjoyneer at 9:29 PM No comments:

Taste of the Real World

I want to say that I got my first taste of the real world today since today was my first day of work! However, I got many tastes of the real world during summer internships when I was working and had to pay bills. So never mind that.

But today's tasting was pretty sweet! Woke up at 6:30am with ample amount of time to get ready to head out at 8am. Had kind of a slow start though since I woke up at a weird time in my sleep cycle. Finally met my boss, who is awesome! She was really welcoming and introduced me to everyone in the office. After teaching me all the basics (outlook, phone, breakroom location, supply closet, etc), we sat down and went over the schedule for the next 8 weeks. I LOVE EXPECTATIONS AND SCHEDULES. She's my type of gal. For real. She likes color coding and lists too!

For lunch, we went out to eat at The Cheesecake Factory and I ordered the lunch Da Vinci Pasta and got to know each other better. Tomorrow, I'm going to lunch with my mentor/buddy who has been in my position for the last year. So far so sweet :)
Posted by enjoyneer at 9:53 PM No comments:

God and Victory World Church are rocking my world and turning my world upside down. First, Peru, and now, Atlanta!

After our Peru Team reunion today of eating Chinese food and watching X-men, we went to Quick Trip. Fusion, the church's young adults ministry, is doing something called Fusion on Tour. Instead of meeting for their weekly large group, they are going out into the city of Atlanta to share God's love.

Part of Fusion on Tour is something called the Gas Groupon, where as a group, we bless a random pump at the gas station by prepaying for a pump's gas. Originally, we were going to put $13 at pump #7 and #13 each, but the guy messed up and put $26 on #7. We saw a white van drive up to our pump and an Asian woman stepped out.

"Hi we're with Victory World Church and we just wanted to bless you by prepaying for your gas."

"What? Really?" The woman looked bewildered as tears welled up in her eyes. She only had $12 in her hands for gas.

We found out that she's from Vietnam and her name is T. She thanked us and asked where our church was, and we gave her an address. She hugged us and said she'd come visit the church :) Then we parted ways.

Right when we thought we'd be calling it a night, another Asian man walks up to us. He's also from Vietnam, and he says he doesn't speak English very well, and tries telling us that he needed money to take the bus home. He pulled out a sheet of paper and told us that he was just in jail for the last 3 months in one area of Atlanta, and came out with no money to get back to his home in Marietta. He said he had been walking a long time, and he was hungry, and just wanted to get home to his apartment.

"Ok sir. We'd love to help. There's a McDonald's next door, can we take you to get something to eat? Also, it is too late for any of the buses to be running to Marietta tonight. Let us get you a taxi back home. Do you know the name of your apartment?"

He said he didn't know the address or the name of the apartment complex since his English isn't very good. We asked if he had any family there, and he said no, but he lived with his friend who hadn't been answering any of his calls and his kids are in Vietnam. He asked us again for money to take the bus back to Marietta. When we continued to offer him a meal and a taxi ride, he finally said, "Please, I just want to see my kids!"

We knew that the man had been making up his story and it had been falling apart on him. Finally, we told him that we wanted to help, and we could take him to eat at McDonald's, but that's it. After that, he said, "No, I'll just walk." We prayed for him, and he left.

PHEW! What a night! I'm so so grateful that I found people who can challenge me like this post-graduation. And they did it so lovingly and graciously. Oh man. They never called him out on his lies, and didn't give him money straight up so that he could use it to feed bad habits. Instead, we just offered pure generosity and help.

Someone made the observation that the responses of these two people are so contrasting. That one welcomed and appreciated our offer and the other rejected our offer. This can be found in many parables that Jesus tells, and they usually point to the open one gets to know and be with God, and the hard hearted ends up gnashing their teeth for eternity. Mmm gotta love late night lessons at Quick Trip!
Posted by enjoyneer at 11:27 PM No comments:

As you all know, I will be leaving tomorrow for a mission trip in Peru! My team will be putting on many dramas and programs for street kids in San Bartolo and Lima. It's been a while since I've done dramas, but drama team kind of defined my last year of high school. I'm excited to get back into it again, especially using it to communicate who Jesus is to us.

These past few days, I've been reflecting a lot on my last overseas mission trip to Kenya. Man, that was such an experience trying to live in tents without showering for a week and not have clean water to brush our teeth with. Let me just say, we smelled pretty bad. However, that was such a great trip because I got to experience a different culture, and see God work intimately in our lives. My prayer is that I will be as open to Peru as I was with Kenya, so that this may be a great learning experience personally, culturally, and spiritually.

Today, I finally met the team after Fusion (Victory World Church's youth ministry). My teammates would see me, say my name and hug me! I felt so welcomed especially since I didn't know who they were haha. Some of them have been to Peru before on previous mission trips, and others are going on their first mission trip ever. Also, I think I am the youngest one on the trip. That means, I'll have lots of older wiser people to talk to :)

Okay, back to packing!
Posted by enjoyneer at 12:42 AM No comments: