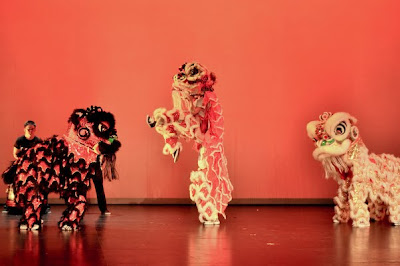 ::Drumroll:: Today we have our first guest post from Jerelaiah on this thoughts on LNYF. Enjoy :)

LNYF 2011.
Best Lunar New Year Festival yet.
Not just because of the dances, which reached new levels this year. We coordinated Lion to be more fun, interactive, and to have more choreography. They even have names now; courtesy of Wendy, the red/black is Cinnamon, white/gold is Sugar, and the little one is Pepper. Sending Pepper out into the audience was a stroke of genius. We got the crowd off to a good start and as the opening act to the show, I think it helped set the tone for the rest of the evening. Have fun, enjoy what you're about to see. It was the best Lion dance I've seen/done in the 4 years I've been here.
Fusion, Chinese Fan were particularly impressive to me. But none of the other acts came off as contrived or unnecessary. Even the skit, traditionally a part that makes the audience cringe in its cheesiness and over-the-top ridiculousness, was excellent. Enough humor, seriousness, and a conclusion that made sense in that it wasn't really a conclusion to the main plot at all but rather focused on the overall theme of Reflection. And the audience ate it all up; they laughed, cheered, ooohed and aahhed in a way that was far more involved than in years past.
We often shared space with Tinikling, practicing in the rooms large enough to accommodate their giant bamboos sticks and our tall lion costumes. I had the pleasure of shooting one of their practices. The fun they had (and we had in our own practices) was indicative of the atmosphere of LNYF. These were unique experiences we were having, unique cultural traditions we were learning together. College is all about those special experiences we can't get anywhere else.
Like Senior Dance. Between the booty drops, body rolls and general ridiculousness, I never had so much fun with people I barely knew before these past couple weeks. Lion Dance was my focus, my main mission. Senior Dance was my party after having accomplished said mission.
Joy was a great partner. We practiced, we drilled our steps. And we still messed up some in the Saturday show (I mean, we only started learning the dance 6 days before the show...). But we still killed it. I've experienced a lot with Joy, from our Freshmen Drama-mime to sticking 5 people in a car from STL to LA to a penguin parade at the zoo; this crazy senior dance we did together will last a long time in the memory bank. I'm not a great dancer. All the footwork and coordination one can gain through sports doesn't really translate well, but still, we were indisputably awesome because of how much fun we had as a group of seniors.
In any case, LNYF was a blast. It's been less than two days since our epic show. I miss the hell out of it already.
Posted by enjoyneer at 11:45 PM