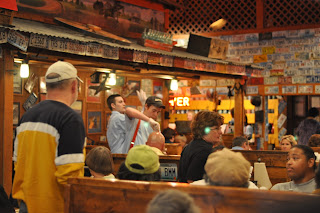 First stop! We ate lunch at the world renown Lambert's Cafe, home of the thrown rolls. This restaurant was PACKED and there were crowds of people (including us) waiting outside for our number to be called. Inside, the servers bring around fried okra, mac n cheese, and potatoes. Another server will come out and throw rolls to anybody who raises their hands for it. SO FUN! It is a must-go if you're driving down to Memphis from St. Louis. 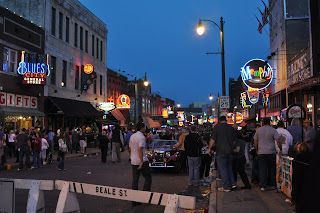 Then we spent the afternoon in Memphis, TN watching the St. Patrick's Day parade on Beale Street. There was this really crazy old grandma who was unreserved in fighting the crowd to get beads. I really hope I don't turn out to be like her when I'm older. We also walked down to the river front and found a rail road track and took boy band pictures. Memphis is definitely very fun and lively, and I wish we had more time to explore the city. 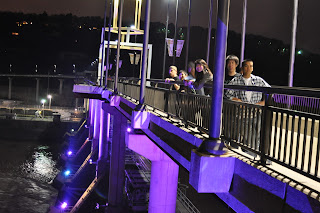 We left Memphis and arrived at our hotel in Little Rock, AR, and went to check out the Big Dam Bridge, a pedestrian/bicycle bridge across a large dam that is illuminated by LED lights. The bridge was pretty, but was surrounded by dark, creepy large houses. Also, while driving there, Martin pointed out, "I've seen three churches in the last 10 seconds!" There seriously were so many churches in Arkansas.

Overall, great first day of the road trip. Now I'm exhausted, and so excited to sleep on the down pillows at our hotel. Good night!